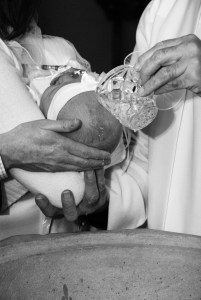 Where I’m From –  I said it so many times but what does it really mean?

I recently listened to a Genealogy Gems podcast episode number 185. To my delight, I discovered that Lisa shared my blog! Thank you, Lisa!  I was also introduced to George Ella Lyon poetry. The poem “Where I’m From” featured there made me really think.

Lisa proposed a challenge for readers to write their version of the poem. It sounded more like a dare to me, but I thought to myself “nahhhh there is not a drop of poetry in me”. BUT… To my surprise, I discovered that a part of my mind was constantly thinking about the poem during long hours of driving I do every day. So I let it flow and was really shocked to notice that it just appeared from nowhere! It might not be perfect or even good, but it is mine. The other surprise was to learn that I remember sounds, tastes, smells and feelings. I guess the Magdalene cake scene from Marcel Proust’s In Search of Lost Time makes a lot more sense to me now!

My version needs a few pictures and a bit of background for non-Polish readers on customs surrounding All Saints Day (1st of November). The whole country goes to visit family graves; on a scale, I did not see in any other place on the Earth. In the evening, any graveyard can be seen from far away as it is covered up by thousands of candles. There are processions and masses said among the graves.  Every family gives their list of passed family members’ names to be read out during celebrations. You can see a small clip of what it is like here. I am going to write a separate post about this soon as this is one of the intriguing aspects of my family history.

There is my own version of “Where I’m From”

I came from the gentle touch of a spring wind bringing the smell of lilac
I came from sweaty dust of country roads scorched by a summer sun
I came from autumn leaves slowly falling from a forever old walnut tree outside my window, and from a white icy hill never conquered by a car in the winter

I came from a bowl of warm, frothed up milk freshly squeezed from a cow and shared with cats on a golden straw of stables floor
I came from wooden walls of a church that seen it all
I came from a sound of Ave Maria sang  every noon by my granny and from the smokey smell of my grandad’s  green body warmer
From flowers never growing in  tidy rows and orchards full of sour cherries and sweet apples
From the unmissable sound of tractors, laughter and shouts of never stopping farmers
From the taste of grain coffee on a hot day and sweet black lemon tea when my eyelashes were all frozen shut.

A small girl in a sea of flames on a crisp November evening lighting a candle
Just another name on a long list called by a priest gone, rediscovered, never forgotten
Floating through her veins a sense of belonging 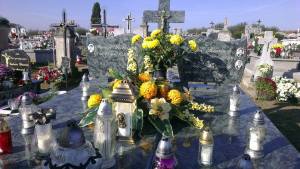 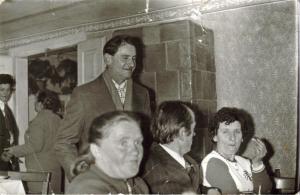 It is very hard to explain why genealogy is more exciting than I first thought. I guess the answer has a lot of different layers.

Ever since school, I always liked history, but not all the dates and facts teachers want you to remember. It was always the thought that if it wasn’t for an ancestor who survived through hard times (like times without microwaves, cars, roads or the Internet) we wouldn’t be here today. This curiosity about life in the past led me to attempts at finding out more about my own ancestors; who they were and what their life looked like. Due to the lack of suitable time travel options, I had to turn to old archives and records. Searching for Polish ancestors is nowhere close to the convenience of having nice, digitalised records (a reality in the UK), but, for me, it has an important bonus. When I go to a parish somewhere in Poland and read the actual book that holds the old parish register it gives me the feeling of a physical link to my past. I am holding something that my 4th great grandad touched or looked at when he came to the church to share and record a joyful or sorrowful experience. It gives me the feeling that the years and centuries have swished by me and suddenly I am looking into the old record with his eyes. Am I crazy? Maybe just a little bit, but who isn’t?

The other reason why I am so into researching my family history is that I like jigsaw puzzles. I know it makes no sense at first glance, but let me explain. When I was a child I loved putting jigsaws together – the bigger, the better. I loved the challenge of piecing together thousands of fragments until they formed a nice, shiny surface that I could glue together with a feeling of well-deserved pride. Piecing together my family history is just like that. You need good eyesight, determination, patience, persistence and a bit of stubbornness. It is better to start with a frame and easy to assemble parts (information you know about your parents or grandparents and people with unusual names) and then start filling spaces of a lovely blue sky or the red sun setting over a deep dark water of which you have only about 1500 pieces! Sometimes, when you have to pick up every single piece and try it on every possible angle and it doesn’t fit, you feel disheartened. Sometimes you put a piece in and you think it fits, only to find out few weeks later that it does not! But sometimes you pick a piece of a blue sky out of a pile of 1000 exactly the same blue, you try it and it fits! And this feeling keeps you going and holds your interest and immediately you know why you are doing it! When I find a new person I spent weeks looking for and all the dates and names suddenly make sense, I realise this is why I love genealogy so much. I want to build this beautiful jigsaw and glue it together so I will always remember where I came from, whose blood is running through my veins and how much strength is in that blood, but that’s a topic for another story.

Have a look at my family tree.

How about you? What drives you? What makes you tick?